As a fine art dealer (and former antiques dealer), Ms. Fisher auctioned 18th- and 19th-century art and antiques at Christie’s and Sotheby’s, and procured fine period art for private collectors worldwide. On this site, she is delighted to offer a small selection of fine 18th-century French drawings and prints, and 19th-century French academic paintings. Many of these pieces are from her previous business (Andrea Fisher Fine Art) and represent artists whose works are housed in the permanent collections of art museums worldwide, including Le Musée du Louvre and The Metropolitan Museum of Art.

It is her great pleasure to discover and study art from these periods, as well as share their beauty and history with others.

Art works available for purchase are in the process of being posted, starting with the 18th-century French, chalk-manner etchings. Artists represented include: Gilles Demarteau (1722-1776) – Court Engraver to Louis XV, Louis-Marin Bonnet (1736-1793), Pierre Carrier-Belleuse (1851-1932), Albert de Belleroche (1864-1944), and Alexandre Falguière (1831-1900). [Note: among the works available by Demarteau are an important pair of etchings with Royal provenance.]

For the purpose of historical reference, important pieces sold by Ms. Fisher will also be listed on these pages. These include a painting by French academic artist Charles-Amable Lenoir (1860-1926), who is considered by scholars to be the finest disciple of William Bouguereau, and from my personal collection, an original etching by the noted rococo artist, François Boucher (1703-1770) – Court painter to Louis XV. 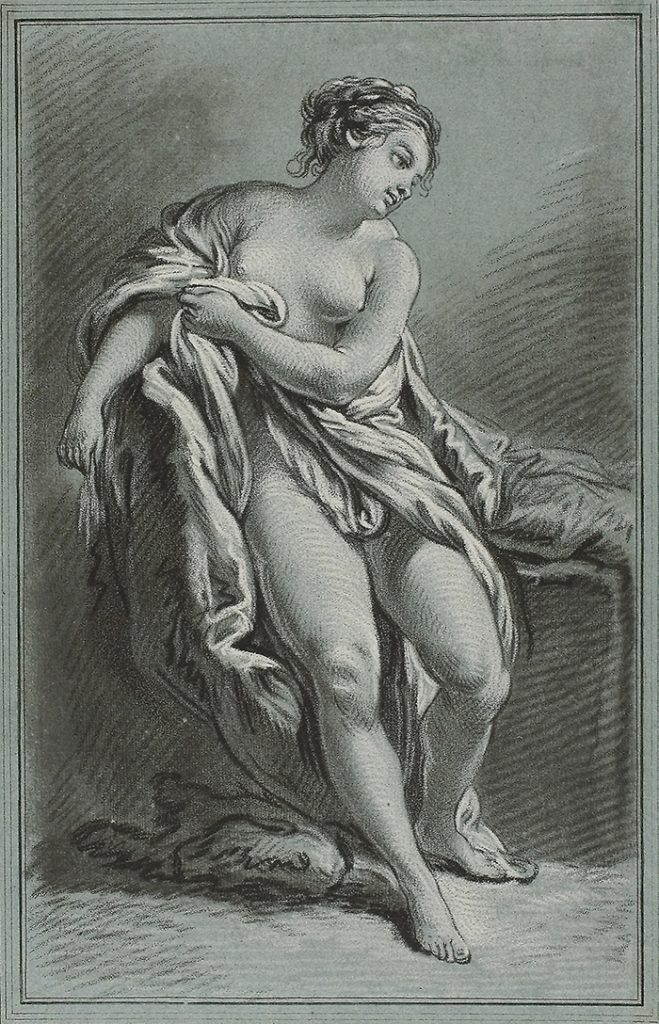 This finest-quality, 18th-c. French chalk-manner etching (also called crayon-manner), uses black and white inks on blue paper to beautifully capture the sensual and fluid contours of Boucher’s original drawing. The chalk-manner etching acheived the affect of creating the illusion of a pastel drawing by using roulette wheels to roll dotted patterns onto copper plates. The Court, nobility, and the public, were smitten with the new style of pastel drawings created by the great 18th-century French rococo artists. This printmaking technique allowed the masses to own something very close in style and quality to those original drawings. Interestingly, these prints were so beautifully executed that they too became coveted by nobility.

Bonnet and his colleague, Gilles Demarteau (who was Court Engraver to King Louis XV), were considered to be the most important engravers of two-color graphic reproduction techniques in 18th-century France. In fact, Bonnet is also attributed with introducing a third color to the technique of chalk-manner etchings. This etching is also in the permanent collections of The Art Institute of Chicago. It was a great pleasure to have lived with this beautiful piece of art, until it found its home.

ABOUT BONNET:
The art scholar Jean Adhémar states, on page 135 of his text Graphic Art of the 18th Century (published by McGraw-Hill, 1964): “Louis-Marin Bonnet developed the process still further, and engraved in the ‘pastel manner’. He boasted his ‘secret’ in 1769, but had begun using this method in 1767, after trying to perfect the process for several years. Bonnet was born in Paris in 1736 (and died at Saint-Mande in 1793), studied under François (1757) and then under Demarteau, and began by inventing a method of printing to give the effect of a drawing a deux crayons, on blue or grey paper (in about 1767). His process for imitating pastel drawings ‘complete with all the colours, both light and dark, completely deceives the eye and equals the originals for the freshness and liveliness of the tints’. These are skillful facsimiles, which do indeed deceive the eye, especially when they are framed. Bonnet made reproductions after Boucher, and later after Huet, but his most successful piece is undoubtedly the famous Head of Flora achieved by a combination of different techniques and eight separate printings.”

I am thrilled to announce that Bonnet’s famous 18th-century, chalk-manner etching Head of Flora (Tête de Flore), and its companion piece Head of a Woman (Tête de Femme), are available to purchase and will be posted shortly. These are rare, original 18th-century pieces, and are seldom seen together.

Tête de Flore is part of the permanent collections at the Philadelphia Museum of Art, the Rijksmuesum, and the Victoria and Albert Museum. It has also exhibited at The Met, The Art Institute of Chicago, and the National Gallery of Art.

RECOMMENDED READING:
For those with further interest in 18th-century French printmaking, I highly recommend the exquisite book Colorful Impressions, The Printmaking Revolution in Eighteenth-Century France, by Margaret Morgan Grasselli of the National Gallery of Art, Washington DC. The book chronicles the museum’s 2003-2004 exhibit of 18th-century French prints, while exploring their historic and artistic value. Pages 68 through 71 are devoted entirely to Louis-Marin Bonnet’s Tête de Flore. These pages include photographs of the eight progress proofs, as well as Bonnet’s written account of his methodology.